From Soldiers Hospital to Arts Center

The opening of the Veterans Administration Hospital on the west side of Roseburg in 1933 resulted from a long history of medical care for veterans in Douglas County.  The army erected the first federal medical facility in 1856 at Fort Umpqua at the river mouth.  The wood frame building was an interesting combination of hospital and billiards hall and served the soldiers stationed at that outpost until it was abandoned in 1861.

With the waning of the nineteenth century, Oregon residents became acutely aware that an aging population of pioneers included a number of veterans who required medical care.  The federal government’s commitment had been modest.  Military “bounty” lands had given some veterans or their widows a chance to acquire property where they might live or lands they could sell.  Pensions were limited.  Thus in 1893 the State of Oregon authorized the Oregon State Soldiers Home on West Harvard Street in Roseburg.  This hospital-home was specifically designed to meet the needs of the non-Indian veterans of the Indian wars.  These men were not covered by federal pension programs and many, by the 1890’s, were in dire circumstances.  The facility was dedicated on September 28, 1896, and became the last place of residence for dozens of men who had served not only in the Indian wars but also in the Mexican War and the Civil War.  Then in 1917 the new and beautiful home, the new northwest federal soldiers’ home (our home) was built. The area complex consisted of an administration building, two barracks, hospital, central heating plant (now the clay place), kitchen and mess hall, a commissary cellar, ice machine, laundry, garage and barns. 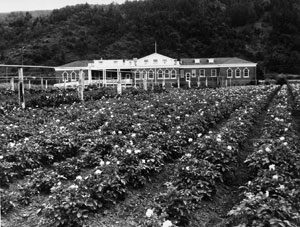 During the six years of Sam Starmer’s administration the home was brought to high state of efficiency. The 25 acres were successfully and scientifically farmed and produced a large part of the fresh food required, and the sale of surplus products added materially to the fund for maintaining the institution. The grounds about the buildings became a show place of the state.

With the onset of the Depression in 1929, civic leaders in Roseburg sought ways to stimulate the local economy and to assist those who were in need.  Roseburg’s difficulties commenced in 1927 with the opening of the Natron Cut-Off, which shifted rail traffic via the Middle Fork of the Willamette.  Eugene became the new railroad division point and Douglas County lost jobs and payroll.  W.C. Harding, a real estate salesman and secretary of the Chamber of Commerce, and Dr. Earl B. Stewart, an active member of the American Legion and a man familiar with the overcrowded conditions at the old soldier’s home, led this effort.  In a matter of days these men and others helped mobilize Roseburg’s bid for the location of a new, federal hospital for veterans.  Careful discussions convinced other Oregon cities to bow out of the competition and, at the same time, the promoters enlisted the assistance of the state’s congressional delegation.  Stewart made two trips to Washington, D.C., and Harding also crossed the country with the result that in June, 1930, President Hoover signed the bill authorizing a veteran’s hospital in Roseburg.

When it became evident that Roseburg did not have sufficient land for such a site, several leaders of other communities in Oregon and Washington sought the facility.  Roseburg interests had to move quickly.  They secured a bill which passed the Oregon legislature in January, 1931, allowing municipalities the right to purchase land outside their city limits and donate it for state or federal government use.  In 1931 several veteran’s organizations endorsed Roseburg as their choice, and in September the Federal Board of Hospitalization, aware of the long use of the city as a veterans care site, recommended that the new branch of the National Soldiers Home for the Pacific Northwest be located in Douglas County.

This decision was heralded in Roseburg with enthusiasm:  fire sirens, firecrackers, noisemakers, and serpentine dancing through the streets, hotels, and theaters were the first reaction.  Eleven days later on September 19 an estimated 10,000 people gathered for a celebration with dances, a parade, banquets, and sporting events.  Grasping the meaning of forthcoming federal expenditures in the town, local businessmen dressed in “Prosperity Garb”   They wore cutaway coats, spats, derbies, and other “fancy” garments.  Local women, however, turned to the past and appeared in long dresses, hoopskirt’s, capes and large hats.

The trustees of the 40 acres held by the Oregon State Soldiers Home since 1893 agreed to transfer that property to the federal government.  The state legislature ratified this action on February 16, 1932.  A committee of Roseburg citizens next negotiated for the purchase of 24 parcels of land, a total of 410 acres, funded by a local bond issue.  This land, to the west of Roseburg and fronting the South Umpqua River, was deeded by the city on March 10, 1932, to the federal government.  Thus a series of property transfers had secured the site for the new facility.

Work commenced in April, 1932, on the new veteran’s complex; Murch Brothers Construction Company of Missouri won the low bid for the project.  Excitement mounted in Douglas County when the local newspaper reported that the government would spend an estimated $2.5 million for three general hospitals, three convalescent buildings, service structures, and residences for the manager, nurses, and officers.  In addition, the project included a bridge across the South Umpqua to the site of the old State Soldiers Home which was to find new use for administrative offices.  Local residents had preference in hiring for the dozens of jobs in the period of construction. 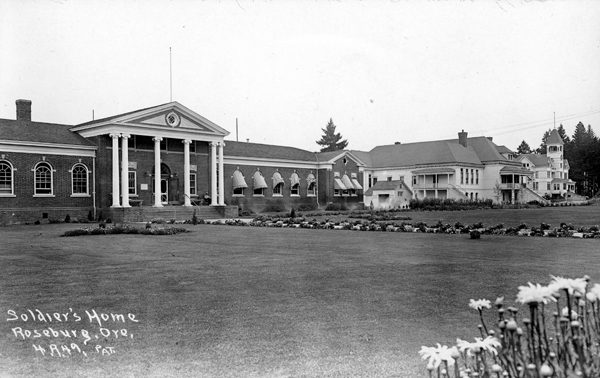 On May 8, 1933, the first 69 veterans moved into the new facilities.  Gradually the government enlarged the scope of the unit.  In 1937 the Veterans Administration opened a nero-psychiatric ward capable of housing 670 patients.  In 1955 new facilities included medical and surgical wards and a nursing care unit.  Because of the extensive acreage of the site, other government agencies also located nearby.  The Defense Department established training centers for the Army and Navy Reserves and both the Bureau of Land Management and the U.S. Forest Service erected buildings for their tasks in the county.  In 1957 the government relinquished to Roseburg 157 acres for Stewart and Gaddis parks.  Although the veteran’s hospital never attained the projected resident population of 4,500 anticipated in the 1930’s, it served a valuable role in meeting the needs of an aging and often ill population of men who had served their country.  In the 1970’s the Veterans Administration operated a psychiatric ward, alcoholic rehabilitation center, and 218 beds for medical patients at the Roseburg facility.

Since this time, Umpqua Valley Art association has adopted this facility and filled every corner with art and offices to operate.